The History of the Greater Raleigh Alumnae Chapter 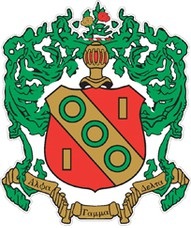 In September 1948 the Gamma Epsilon Alumnae Chapter of Alpha Gamma Delta was formed in Chapel Hill. Most of the members were Gamma Epsilon alumnae from the University of North Carolina at Chapel Hill and the rest were from other chapters. Barbara Spain (Dobbins) '47, was elected the first president. Following is a quote from the April 1950 "Epsilon Echo" newsletter:

Although the attendance at the meetings was pitifully small, the group managed to help with undergrad rushing, give a Christmas party, a farewell party to Seniors and contribute toward the National Altruistic project. The latter was accomplished by raising the money at a very successful cake, pie, and cookie sale, bringing in a total of over $40.00.

In the Fall of 1950 the headquarters for the alumnae chapter were moved to Raleigh because so many of the sisters lived there. Even though they were no longer in Chapter Hill, they were still very involved with their undergraduate sisters at UNC. Following is a quote from the April 1951 "Epsilon Echo", edited by Dotty Cameron (Tringali) '47:

In January, they made white satin muffs for the pledge dance. Several members attended the dance and Wuff Newell (Eleanor Newell Maynard) '50, did a full-page feature story with pictures on it for the "News and Observer".

January 1965 was a very sad time for the alumane of Gamma Epsilon Chapter. They learned that the Gamma Epsilon Undergraduate Chapter would leave the UNC campus in June. The general consensus was that there were not enough pledges in the fall of 1964 to enable the chapter to continue financially another year. The following is a formal announcement of the closing from the May 1965 "Epsilon Echo", edited by Joyce Jones, '48.

This devastating loss was not the end of the alumnae chapter, however. In 1968 the chapter was the only active organized sorority in the Raleigh area. According to Joyce Jones, "Gamma Epsilon lost its undergraduate chapter but it certainly didn't lose its spirit." (Fall 1968, "The Echo")